Not All Bees Make Honey 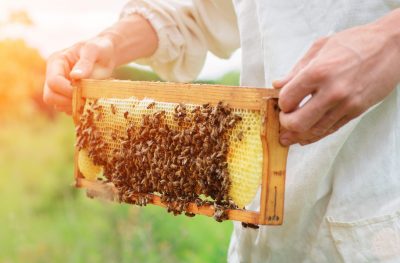 In fact: there are about 20,000 species of bees in the world and only one makes honey.

The other 19,999 species collect pollen and nectar for food, but don’t produce it as a sweet treat. The honeybee is the one that most people think about when they think about bees. It’s also the only bee that has been domesticated by humans.

Other types of bees may make a sweet substance called propolis, but this is used as an adhesive to seal up cracks in their hive or as a defence against predators.

The latin of honeybee is Apis mellifera. Apis is Latin for “bee”, and mellifera is the Latin for “honey-bearing” or “honey carrying”.

The word “honeybee” comes from an ancient Indo-European root word meaning “to fly,” because these insects are capable of flight at speeds up to 15 mph (24 km/h).

Honeybees can be found on every continent except Antarctica. They are social insects, meaning they live in colonies of hundreds or even thousands of bees. They cooperate to find food, build their hives and protect the hive from predators.

The honeybee is closely related to bumblebees and stingless bees, but they differ in size and appearance. The worker bees and queen bees of the colony have a sting, but it is not used unless they feel threatened or their hive is disturbed.

Foraging workers bring nectar back to the colony where it is mixed with enzymes and passed down through generations of worker bees until it becomes thickened into honey.

Each colony consists of a queen, drones (males), and workers (females).

The queen bee lays hundreds of eggs per day, but she can only fertilise about half of them herself. The other half are fertilised by male drones that mate with her during flight or inside the hive. But they don’t contribute anything else to the colony’s welfare.

The workers are responsible for caring for all of the needs of their community — from feeding young larvae to building new hives and defending against invading wasps and hornets. They also produce honey, pollen and wax as part of their life cycle. The worker drones live for only a few weeks after they emerge from their cells as larvae, while nurse worker drones may live up to six months during winter hibernation.

Honey bees collect pollen from flowering plants like apple trees and blueberry bushes using their long legs with brushes at the end that sweep pollen off flowers into baskets on their hind legs. They use this pollen to make bread (bee bread) for their babies. Honeybees make honey by sticking together nectar from flowers into hollow cavities made by worker bees called wax glands located on their abdomens. The nectar is warmed up until it becomes thick enough to store as honey in these cavities after which they can be enjoyed and shared between bees and humans.