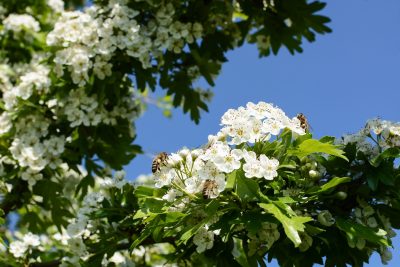 Hawthorn is a rare type of honey made from bees that have foraged predominantly on hawthorn blossom from trees and bushes. They can be found in hedgerows, woodlands and shrubland throughout Europe and North America.

The blossom is bright white with petals and look like little starbursts of colour when they bloom in spring time. The berries are red or black, depending on whether they’ve been pollinated by birds or bees! The hawthorn blooming period is in the spring around May (hence the other popular names for the species such as mayblossom, maythorn or may) which means it is harvested during June and July.

Now back to the honey.

The flavour of hawthorn honey depends on where it comes from. In general, it has a light floral aroma with notes of orange and citrus blossom. The taste is sweet, but also slightly fruity — often reminiscent of lemonade or tea. It has a lovely nutty aftertaste.

Hawthorn honey colours range from pale yellow to dark amber depending on when it was harvested; lighter coloured honeys are produced earlier in the year than darker ones as more bee workers are needed to forage for food (nectar) for the colony.

Hawthorn honey isn’t just for eating on toast; it’s also used as an ingredient in herbal teas, cough drops and other natural remedies. The flowers have been used for centuries to treat heart conditions such as angina and high blood pressure. In addition, they are often used in:

cosmetics and skin care products because of their anti-inflammatory properties. It’s also used to make mead — a type of fermented alcoholic beverage that’s popular in Europe.

Hawthorn honey has also been used as an alternative treatment for arthritis and gout by people all around the world since ancient times. It contains antioxidants that can help reduce inflammation throughout your body and may help improve blood flow while reducing cholesterol levels.

To ensure you take the maximum of Hawthorn honey ensure the honey has not been pasteurised. Its flavour is delicate and subtle, perfect to sweeten things up while having all the beneficial properties raw hawthorn honey has to offer.