By RRH Delicious with Real Raw Honey No Comments 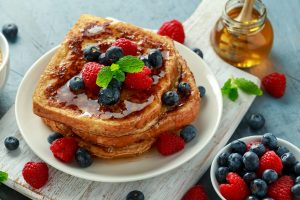 Direction
1. Mix together the eggs, milk, vanilla and cinnamon.
2. In a frying pan, heat one tbsp of butter and one tbsp of oil.
3 Dunk the bread into the mixture, soaking both sides. Transfer to the heated pan and fry for 2-3 min on each side while golden and crisp.

Serve with fresh berries and pour with raw honey.

By RRH You Ask, We Answer No Comments

The word propolis is derived from the two Greek words – Pro, which means “defence”, and Polis “, community”.

Honey bees produce propolis, mixing saliva and beeswax with a substance called exudate, which is gathered from the plant, buds and exudates.
When gathered from the beehive, propolis is a sticky, yellow to a soft brown mass. It has a pleasant and strong aroma – a mixture of beeswax, resin, honey, and essential oils. It tastes sharp and bitter.

Bees use propolis mainly as a sealant and disinfecting material. Propolis is used to seal holes and cracks, smooth the inner surface of the hive, retain internal temperature, and prevent weathering. Due to its antimicrobial activity, it also contributes to an aseptic internal environment.

In ancient times propolis was widely used in folk medicine. Greek and Roman physicians used propolis as a mouth disinfectant and healing agent in wound treatment. In the 17th century, propolis was listed as an official drug in the London pharmacopoeia. In 1909, the first scientific research on propolis was published, which included its chemical properties and composition. While the composition of propolis will vary depending on the origin, generally, propolis contains 50% resins, 30% waxes, 10% essential oils, 5% pollen and 5% various organic compounds. Propolis also contains antioxidants such as polyphenols and flavonoids.

In our days’ propolis can be found in many health stores in different forms for external or internal use. It is also used in mouthwashes, toothpaste, cosmetics creams, health foods and beverages. It is also available in the form of capsules throat lozenges. Another popular product made with propolis is Propolis Tincture. It is made by dissolving propolis in 70% ethyl alcohol and straining the precipitate.

While propolis is considered generally safe to use, it may cause an allergic reaction. Always consult with a specialist before trying.